As of July 1, 2004, Pacific Coast Terminals (PCT) has introduced new security procedures in accordance with the requirements of the ISPS Code and the new Marine Transportation Security Regulations from Transport Canada. These procedures apply to all persons entering the site.

Failure to abide by these measures may result in the loss of access privileges.

Pacific Coast Terminals is in all respects compliant with the new ISPS Code, and is on the approved facility list from the IMO. Transport Canada has approved PCT’s Marine Facility Security Plan, and has issued PCT with a Statement of Compliance of a Port Facility.

The current Marsec level will be displayed at both berth gates (and the main site gate) at all times. In the event the site Marsec level is increased, the sign will be updated, and you will be notified of the change. 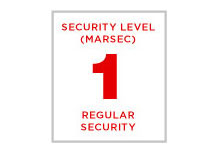