Aerial view of the Port of Vancouver

In 2009, Canadian Exports accounted for approximately $300 billion and solid trading relationships with many countries around the world.

Contributing some $75 billion in trade, the Port of Vancouver in British Columbia is one of the most important engines of the local, provincial and national economies.

The Port of Vancouver accounts for 129,500 jobs across Canada, extensive trade with the Pacific Rim, and a valuable network of trade and transportation infrastructure.

Pacific Coast Terminals is proud to be a part of the largest and most diversified port in Canada. 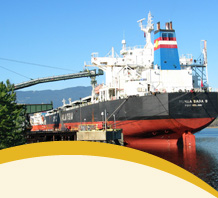 In 1971, superior PCT facilities handle 18% of all cargo (except grain) moving through west coast B.C.